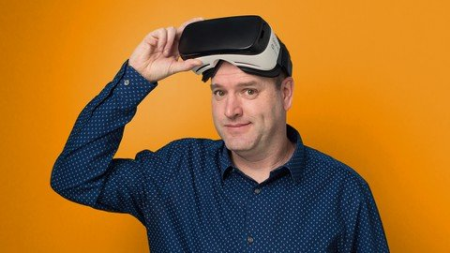 When you enrol to this course, you are guaranteed to get one of our other premium courses for a discounted price of 10$. If you are ready notify us through the email provided in the Bonus Lecture at the end of the course!

Virtual reality has been in existence for a while, but has many new uses in architecture, engineering, and construction (AEC), manufacturing, and dozens of other industries, allowing for innovative ways to visualize and collaborate. New tools including 3D scanning, drones, and photogrammetry, along with access to CAD data, have opened the door to VR in the enterprise space. Tools for real-time visualization have also become easier to use and less expensive. With these advances, it's possible for almost anyone to leverage VR technology to create innovative narratives for seeing, selling, and communicating information. Join 3D artist Craig Barr for an overview of virtual reality: what it is, where it's used, and what's in store for the future of VR. Plus, learn how the VR content creation process works and what you need to know to get started in this exciting (and expanding) field.

Unreal isn't just for gaming anymore. Industries such as automotive design, architecture, healthcare, and education are embracing the real-time development tools for creating engaging and interactive visuals. Unreal Engine can power it all. In this course, Simon Manning teaches the essential skills you need to build immersive user experiences of all kinds with Unreal Engine 4, including lighting, effects, and visual scripting. He covers creating your first project, building a base landscape, blocking out levels, and importing assets for use in the design. Want to find out how to craft a unique look? Learn about working with materials, post-processing effects, and particle systems in Unreal. Plus, find out how to optimize the performance for your projects and package projects for distribution.

Want to work faster and smarter in Unreal Engine? In this course, pick up practical architectural visualization techniques that can help you build compelling experiences with Unreal Engine. Instructor Simon Manning shares tips for working with materials, including how to get realistic mirrors in your scene and give your glass materials reflectivity. He also explores how to regenerate improved lightmaps from within Unreal, as well as how to reduce draw calls and poly counts, measure project performance, and more.

Explore the Unreal Engine by Epic Games and get an overview of augmented reality (AR) basics by walking through a real-world project. In this course, the first in a three-part series, instructor Emmanuel Henri covers the definition of augmented reality and the requirements of an AR project, and shows how to set up and get started using the Unreal Engine. He demonstrates how to add models, lights, and more before showing how to deploy the scene to iOS and Android.

Explore Unreal Engine and get an overview of augmented reality (AR) basics by walking through a real-world project. In this course, the second in a three-part series, instructor Emmanuel Henri continues the project, adding more advanced functionality and interactivity to the AR game. Learn how to add 3D objects to a scene and use hit testing to track whether a user touches real-world or in-game objects. Plus, learn how to deploy your scene to Android and iOS to share it with the world.

Explore the Unreal Engine by Epic Games, and get an overview of augmented reality (AR) basics by walking through a real-world project. In this course, the final installment of a three-part series, instructor Emmanuel Henri takes the functionality you have already built and shows how to add more complex interactivity and animations. Review crucial hit testing concepts and understand what happens when users touch in-game or real-world objects. Then discover how to animate objects with third-party packages and tools like Mixamo, and use interaction blueprints in Unreal. Plus, learn how to deploy your AR scene to Android and iOS to share it with the world.